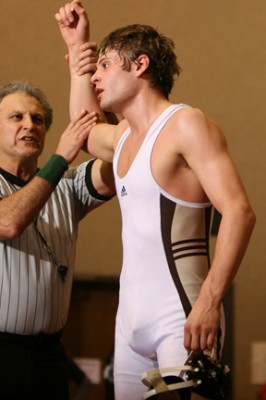 The d3wrestle.com/WWSport.com Wrestler of the Week is Andrew Scavuzzo of Baldwin-Wallace. Scavuzzo, wrestling at 174 lbs., picked up a trio of victories for the Yellow Jackets in dual meets over the past week. He picked up a fall against Heidelberg and a major decision against Muskingum to help his team to two OAC wins, but the highlight of his week was a 6-1 decision over defending NCAA champion Luke Miller of Ohio Northern. Miller bumped up from 165 to wrestle Scavuzzo but was unable to defeat the 2009 NCAA Qualifier. Scavuzzo now sits at 32-2 on the season.

A senior from Cuyahoga Falls, Ohio, Scavuzzo is a two time Ohio Athletic Conference placewinner, winning the title and qualifying for the NCAA Championships in 2009 at 174 lbs. His career record heading into his final postseason is 94-33, and he has won four tournaments so far this season. In high school, he placed sixth in the Ohio state tournament his senior year for Woodridge High School in Peninsula, Ohio. In the final regular season rankings of 2010-2011, Scavuzzo is listed as a Contender and is ranked only behind #1 Kyle Kwiat of Ohio Northern in the OAC. Baldwin-Wallace is finished for the regular season, so the next time Scavuzzo will take the mat is February 25th at Ohio Northern for the OAC Championships where he will attempt to make a return trip to the NCAA Championships.