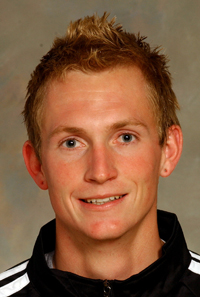 After two years as an assistant coach with the University of Wisconsin-Oshkosh, Chris Stratton was elevated to the head position after Mike DeRoehn left and ultimately became the head coach at Lakeland College.  Stratton also wrestled at Oshkosh, graduating in 2007.  He is also an instructor in the Department of Human Kinetics and Health Education along with his coaching duties.  As he readies to start his first season as head coach, Stratton took some time to talk to d3wrestle.com about his new position and his vision for the 2010-2011 season at Oshkosh.

d3wrestle.com: After moving from an assistant role to the head job, how will your responsibilities change, and what support will you have as you learn the ropes?

Chris Stratton: As the head assistant last year, my main job responsibilities were academic advising, mentoring, and running practices from time to time.  This I will also be doing most of the administrative work and teaching a lot more technique.  I will still take the lead in helping guys achieve academic success as well.  Thankfully, I have a few great assistant coaches that I can depend on in all of these areas.

d3: What are you looking forward to most about your first year as head coach?

CS: I am most looking forward to seeing our team develop as leaders on and off the mat.  Coming into this season, we have a lot of juniors who are looking to step it up to the next level.  Starting with our first meeting, there was a great feeling of community and pride.  Also, I am looking forward to seeing the guys succeed in the classroom.  I have been an academic advisor for most of these guys since they were freshmen, and to see them hammering it out in the classroom and on the mat is something special.

d3: Let me know a little bit about your team.  Top returners and newcomers?  Goals for the season?

CS: Our top returners are two time qualifier Sam Engelland (174) and one time qualifier Zack Mueller (125).  Also returning are José Quintana, who won over 30 matches last year, and Kyle Kleuskens, one of two seniors on our team.  Aaron Erickson is another returner that has shown a lot of potential.  Newcomers we are excited about include Wisconsin State Champions Aaron Toll and Duane Hartkopf, Joey Andrews from the Chicago area, and our top recruit Nazar Kulchytskyy (ed. Note: Kulchytskyy is a Ukrainian immigrant who was a Fargo All-American and has freestyle wins over 4x National Prep champ Chris Villalonga and Dylan Ness, the #2 ranked high school 145 in 2010) .  We have many goals but our top three are as follows: top 10 NWCA scholar team, top 3 WIAC, and top 10 at the NCAA tournament.

d3: Do you have a specific philosophy on coaching that will guide your actions and decisions this season and beyond?

CS: My philosophy for Division III wrestling is that it is all about the student-athlete.  I want all my guys to be confident in the classroom as well as on the mat.  The rule our team follows is to never do anything detrimental to yourself.  We take pride in our team commitment to both academics and athletics.  Any decision I make regarding our program revolves around what is best for the wrestlers.  We only keep guys on the team who are 100% dedicated to the team.

d3: Tell me something unique about your team/school that would draw potential student athletes?

CS: I think the most unique thing about our team is our coaching staff.  We have coaches who cover academics, advising, spirituality, and technique.  We pride ourselves in the family type atmosphere we develop.  As a school, UW-Oshkosh has a lot of different opportunities for students.  I encourage all my guys to get involved in other clubs and organizations in order for them to fully develop as a professional.  Our school is also a leader in many areas such as its recreational facilities, state of the art sporting facilities, and its commitment to going green.

d3: What is the most important thing an athlete can focus on as he prepares for the upcoming season?

CS: In my mind, the most important thing for our guys to focus on right now is their school work.  Many times freshmen come in to the first day of practice already doomed from their first seven weeks.  I want everyone on the team to have at the very least a 2.5 on their grade check-up forms.  If guys are on the straight and narrow as far as school work goes, we can get them in shape and teach technique throughout the season.

Stratton added the following as a final word:

Having been an assistant coach here at UWO the past two seasons I expect a lot from our team.  When I came in, we had a lot of young guys who we knew had a lot of potential.  It’s time for our guys to step it up and prove they can be a top ten team.  I love Division III wrestling because it’s about more then just wrestling; it’s developing individuals into professionals in their field of study as well as teaching them about teamwork and leadership.