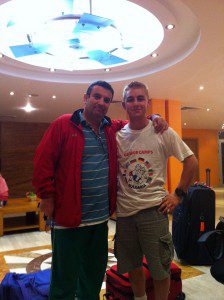 We woke up in the morning and had a last breakfast in targoviste (where the tournament was). Then we drove about an hour back to Bucharest to go to a wresting/education center. When we got here we put are stuff in are room and went up to the wrestling room and a had practice with there guys. But before we practiced we warmed up but not your typical war up. We played this game where u take a yoga ball and you had to throw it to your teammate and he had to head it into a goal once your team had two goals a different team would come in. Apparently this is how most Europeans warm up before a practice I would have to say I enjoyed it a lot more than just running around a circle and stretching that way. We each wrestled with a Romanian so we got the chance to learn some new drills and did a little live. after the practice we had lunch and then went and looked around the city for a while. we got back and had another practice at 5 this practice was a little different, we only drilled a little bit and did a lot of live which was nice because we got to go live with a couple differnt wrestlers. after that we went in the sauna which was a lot hotter than any one I have been in back home. — Jake Fredricksen

Saturday June 2nd in Poland airport. We got dropped off at the Bucharest airport at 330am and are on layover at the moment. We will have lunch as a group and close down our trip. I really enjoyed our last competition we had on Thursday night–each guy got 3 matches against a team of 13 from Varna. There was a good crowd of people to watch in the two mat gym. I had been in this gym before and there was a lot of enthusiasm from the youth in the club. the guys all got to trade for clothes and shoes after the dual and we ate with the other team at the hotel restarant. We will all be able to wrap up the trip and include pics–at least some of the best ones. — Tim Fader

There are many different ways I look back on my experience in Europe, I could say I had lots of fun and it was exiting, I could say that it was a learning experience and my wrestling has benefited from the competitions and practices, I could even say that it was a great vacation while we hung out at the beach on the Black Sea. But for me the experience was deeper and more rewarding than that. I was lucky enough to travel through several countries and experience a culture far from my own while interacting with individuals who have different perspectives on life. From eating uncooked hotdogs and slices of cheese for breakfast to being hassled for speaking only English I’ve begun to appreciate the small things in my life which we take for granted, even having juice with breakfast comes to mind. Wrestling was a vessel in which I was able to share a journey with a group of men who traveled across and through a place where none of us would haver ever gone, we lived together as a family, and I think we all came home with more than a few t-shirts and photographs. Special thanks to Tim Fader, George Kaltchev and DIII for organizing and guiding this trip. And to everyone who has the opportunity to participate in an International trip in the future, do whatever it takes to make it happen, it is plenty worth it. — Jared Myhrberg

This is my after-action review of the trip. After we left Romania we drove to a resort near the black sea named hotel viva. When we got there, we encountered mass amounts of german kids as they had just finished high school and were on a post graduation trip. While there we trained at a nearby sports school and eventually had a dual with them. With individual victories for all of our wrestlers the meet was a success and concluded with a trading session between our d3 exchange group and a buch of the kids there. With all of the wrestling on the trip done, we spent our final day at the resort relaxing and resting our bodies while at the same time feasting on some eleqoyent quizine. We left at 11pm yeasterday and after much travel (and sleeping in airports) we are all now back in the US.

After being through this trip and experiencing everything I did with this great group of guys I would completely recommend this trip to anyone else who is considering it in the future. I have new brothers who I will forever have great memories with and life long relationships that we can fall back on if we ever meet again. I knew nothing about freestyle and have learned so much from both my coaches and teammates on this trip, which I hope will reflect in my wrestling.

A special thanks to the man in the photo (George Kaltchev) who made it all possible. Thank you for your wisdom, cool music, and awesome driving skills that all contributed to making this trip a great success. — Alex Stewart

Returning back to America was a long trip, filled full of awesome memories and fun times. The chance to go wrestle in Europe was by far one of the best experiences of my life. Wrestling has given me the chance to meet some great new friends and wrestle on an international level. The experience of wrestling in Romania and Bulgaria was something I never expected to have wrestling in college, especially in DIII. Having the chance to share the mat with All Americans, World medalists, Olympians, and foreign national placers is a feeling of sheer amazement. This trip allowed me to experience a style of wrestling that I was not used to and somewhat nervous about but ended up being very beneficial to my wrestling abilities. The trip home started at 11pm on Friday and we went to Bucharest and flew out to Poland at 6am the next morning where we waited for what seemed like hours on end before we finally got on the flight back to the States. Before we left we had wrestled with a Bulgarian team that showed us how involved the community is with the sport, having many locals come to just watch their team wrestle a team of 6 Americans, something I feel that Americans should be doing. Being in Romania showed me a new style of training that that many Europeans partake in, which was surprising but fun. Traveling through Bulgaria had to be one of the biggest highlights of the trip, now I can say I’ve ran and swam in the Black Sea. This trip is one of the best trips out there and I highly recommend it to any wrestler out there at any level of competition. This is a trip that is a cultural experience and a trip that introduces you to many new friends and fun time. It will benefit you in so many ways. I look forward to more trips on the future. — Chris Schenk