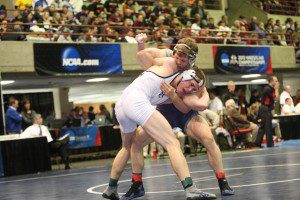 Update 6/6/12: Anthony Edgren of UW-Whitewater also placed in Greco-Roman at 120kg. He won a pair of matches to reach the finals where he fell 2-0, 1-0 to 2011 Junior World Bronze Medalist Toby Erickson of NYAC. Edgren is now qualified for the University World Team Trials in August. He also won a pair of matches in the freestyle competition.

Joe Rau, a two-time All-American from Elmhurst College, placed at 96kg in both styles at the 2012 University Nationals this past weekend in Akron, Ohio. He finished in fourth place in Greco-Roman and eighth place in freestyle. In greco, he dropped a 6-3, 1-0 decision to Alex Polizzi of Northwestern before wining a pair of matches to meet up with Polizzi again in the 3rd place bout. Polizzi prevailed in three periods 5-1, 1-1, 1-0.

In freestyle, he opened with a loss to Adam Fager of Utah Valley but stormed back with five wins in a row before falling to Micah Burak of Penn to drop to the 7th place bout where he fell to Max Huntley of Michigan. See below for some of Rau’s matches from this past weekend.