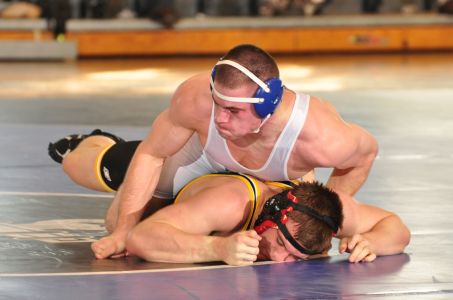 The d3wrestle.com/WWSport.com Wrestler of the Week is Eric Vincent of the United States Merchant Marine Academy.  Wrestling at 197, Vincent won the All-Academy Championships this past weekend hosted by the Naval Academy.  Vincent was seeded first at his weight and won matches against wrestlers from Air Force and Navy to win the title.  His victory was only the second time a Division III athlete has won the All-Academy Championship.  Teammate Vincent Renaut won the 165 lb. championship last year at this event.

Vincent, a senior from Trussville, Alabama, is currently 22-3 on the year and was also the champion at the Long Island Open in January.  Vincent is a two time Centennial Conference champion and has made two trips to the NCAA Championships.  His conference wins have helped Merchant Marine to each of the last two Centennial team championships and a #13 national ranking.  Vincent is ranked #10 in the latest NWCA Individual rankings and is just outside the top ten in the latest d3wrestle.com rankings.  Merchant Marine will next compete tomorrow in a Centennial Conference quad at Gettysburg.  They will follow that up by attempting to defend their conference championship next weekend at Stevens.