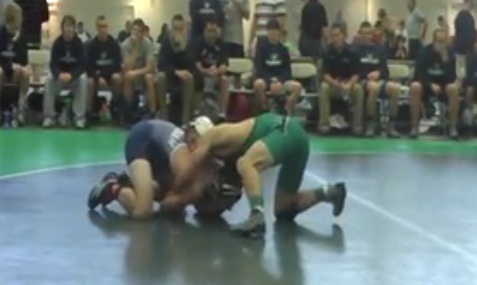 We are catching up on the d3wrestle.com/WWSport.com Wrestler of the Week award and will post one this morning and one this evening so the award will be caught up heading into Christmas.  This award is for the week of December 5-12 and is given to Chris Albright of York College.  Albright, a 141 lb. sophomore had two big wins for the Spartans on Saturday December 11th to help York sweep its quad with Delaware Valley, Wilkes, and Muhlenberg.  Against Wilkes, Albright tallied the only fall of the match over Ryan Wilson to help secure a 19-18 victory.  A bigger win came later in the day against Delaware Valley where Albright dominated 2010 All-American Matt Ulrich 13-0 in York’s 26-9 victory.  Those wins ran Albright’s record to 14-1, with all 14 wins getting bonus points for his team.

Albright, a sophomore from York, Pennsylvania, transferred to York College this season from Pitt.  Prior to redshirting last season, he was Pitt’s starter as a freshman at 125 lbs., compiling a 14-16 record.  In high school, wrestling at nearby Red Lion High School, Albright was a three time District Champion and placed twice in the Pennsylvania AAA state tournament.  He was also a two time finalist in the NHSCA National Tournament, taking first place after his junior season.  The criminal justice major will next compete with the Spartans January 7th and 8th at the Virginia Duals.