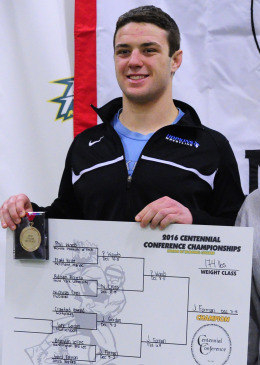 The MyHOUSE Wrestler of the Week is Jared Forman of Johns Hopkins. Forman won the 174 lbs. weight class at the Centennial Conference championships, defeating the 2nd, 3rd, and 4th place finishers in his weight class along the way. In the finals, Forman won in sudden victory against d3wrestle.com Contender Phil Woods of Stevens. Woods had previously defeated Forman 15-4 in an earlier dual meet. For his efforts, Forman was named the Outstanding Wrestler of the event.

Forman, a junior Psychology major from Oceanside, California, is currently 18-10 with seven pins on the season and 47-54 for his career. In addition to his win at the Centennial Conference tournament, he placed second at the Brockport Invitational. Last season, he was a Centennial Conference runner-up. Forman and the rest of the Blue Jays next compete on February 27 & 28 at the East Regional held at Washington & Lee University.