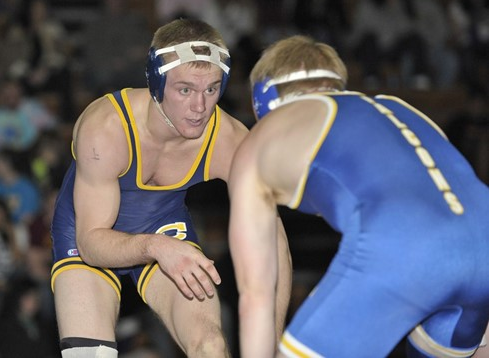 I missed this one from last month, but Ben Chapman has been named as the Head Wrestling Coach at his alma mater of Lakeland College. Chapman takes over for Dillon Bera and has spent the past three seasons as the head wrestling coach at nearby Plymouth High School. Chapman graduated from Lakeland in 2010 and was a three time Northern Wrestling Association champion for the Muskies.

Ben Chapman, a standout wrestler during his time as a Muskie, is returning to his alma mater this fall to become Lakeland University’s head wrestling coach, LU Athletic Director April Arvan announced today.

Chapman, a 2010 Lakeland graduate, returns to Lakeland after several years of coaching and training high school and college athletes.

In addition, for the past five years, he’s worked as a fitness trainer at the Sports Core in nearby Kohler, Wis., and in 2016, he was named youth fitness coordinator for the Sports Core’s Boost Academy, which provides physical and mental training for young athletes.

Chapman, who received a bachelor’s degree in biology, was a three-time Northern Wrestling Association champion and team captain who helped lead the Muskies to three straight conference team titles.

“Throughout my wrestling journey, this sport has taught and given me more than I can describe,” Chapman said. “I appreciate this opportunity to give back to the sport and the school I love so deeply, and I welcome the responsibility to teach our student-athletes about commitment, sacrifice and persistence.”

Known for his versatility on the mat, Chapman won conference titles at Lakeland at 149 pounds, 157 and 174. As a senior at Plymouth High School, he capped an undefeated season with a state championship.