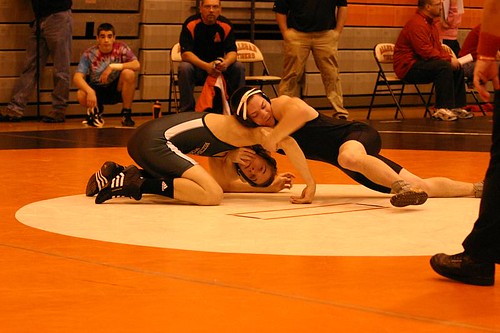 The holiday week was slow in Division III, but there was a performance worth noting as the d3wrestle.com/WWSport.com Wrestler of the Week.  Steve Poffenberger of Augustana knocked off then-number one ranked Nick Nothern of Cornell 4-3 during a dual meet between the two schools on November 25th.  Poffenberger and Nothern were tied at 3 after the second set of tiebreakers, but Poffenberger held the riding time edge and secured the victory over last year’s NCAA runner-up at 133 pounds.

Poffenberger, a freshman from Paw Paw, Michigan, is in his first year of college competition.  He has compiled a 6-7 record to this point including a 5th place finish at the Knox Invitational.  He was the 119 lb. runner up in Michigan in 2008.  Augustana next takes to the mats tonight in a CCIW match at North Central College.