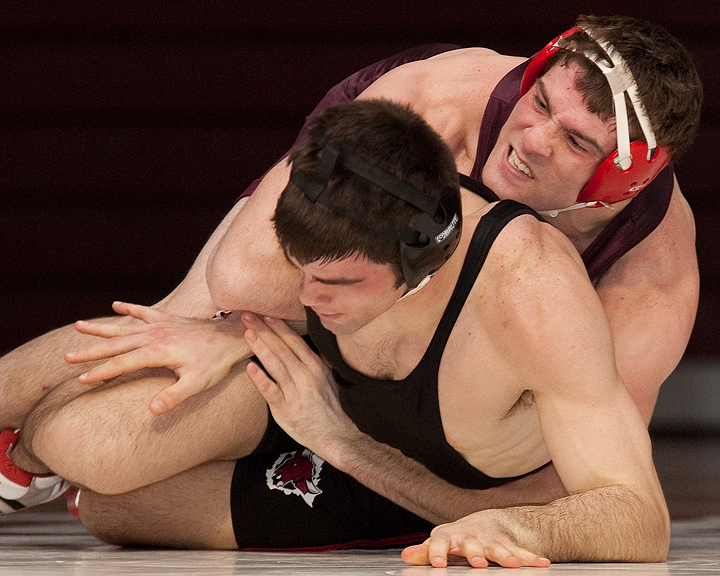 The d3wrestle.com/WWSport.com Wrestler of the Week this week is Jared Massey of Augsburg.  Wrestling at 197 lbs., Massey won both his matches as Augsburg defeated the  #1 ranked team in Division II, University of Nebraska-Omaha, and the #6 ranked team in Division III, University of Wisconsin-La Crosse.  In the match against UNO, Massey defeated the top ranked Division II 197 lb. wrestler Jacob Marrs by a 6-2 margin.  The win proved crucial in the Auggies’ 18-12 win.  Massey also won by major decision against Wisconsin-La Crosse.

Massey, a junior from Circle Pines, Minnesota, is currently undefeated at 16-0 with a tournament title at the Auggie Brute-Adidas Open.  He also picked up crucial wins against ranked wrestlers from Coe and Wartburg to help Augsburg win the NWCA National Duals earlier this month.  Massey is the defending NCAA Champion at 197 lbs., capping a 30-1 season with a dominating performance including a fall and two major decisions on his way to the title.  This season, he has been the wire to wire #1 ranked wrestler on both sets of rankings.  Massey transferred to Augsburg last season as a sophomore, having wrestled his freshman season at Wisconsin in the 2003-2004 season.  Augsburg will next compete on Saturday, splitting the squad between the North County Open and Grand View Open.