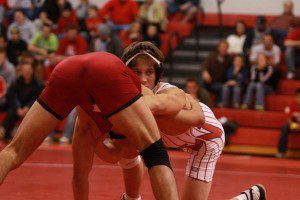 The d3wrestle.com/WWSport.com Wrestler of the Week is Jake Strausbaugh of Wabash College.  Strausbaugh won the Indiana Little State Tournament this past weekend as the #3 seed at 141 lbs.  He advanced to the semifinals with a fall and a major decision where he met #2 seed Thomas Pompei of Trine.  He defeated Pompei with a third period fall and moved on to the final against #1 seed and returning 2x All-American and 3x NCAA Qualifier Austin Bautista of UW-Whitewater.  Strausbaugh upset Bautista in a hard fought 7-6 match (video here) to take the title and avenge a loss from earlier this season.

Strausbaugh, a freshman from Orrville, Ohio, is now 15-4 on the year with a 3rd place finish at the Concordia Open to go along with his Little State championship.  Last year, he wrapped up his high school career with over 140 wins and became the first ever three time Ohio state placewinner from high high school after a fifth place finish in the Ohio Division II state tournament.  Wabash next competes this Saturday at the North Central College Invitational in Naperville, Illinois.