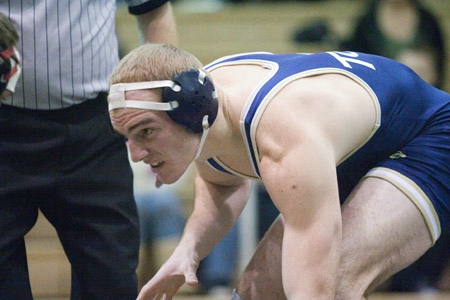 The d3wrestle.com/WWSport.com Wrestler of the Week for the first week of December is Mike Denver of The College of New Jersey.  The 184 lb. Denver wrestled in a pair of events this past week, picking up a pair of big wins.  First, on Wednesday, TCNJ defeated King’s 42-3.  The feature match of the night was between Denver, ranked #4 in the latest d3wrestle.com Rankings, and Mike Reilly of King’s, the #5 ranked wrestler.  Avenging a loss from last season, Denver defeated Reilly 9-5.  On Saturday, Reilly placed first in the York Invitational.  In the finals, he defeated Alex Martocello, the #10 wrestler in the November 17th edition of the NWCA Rankings, by a score of 7-5.  The win in the finals moved Denver to 15-2 on the year, with both losses coming to Division I opponents.

Denver, a senior from Bayville, New Jersey, finished 7th at the 2010 NCAA Championships at 184 lbs.  He was the Metro Conference champ and compiled a record of 45-4 last season.  The finals on Saturday were the 100th match of his career, and he now has a record of 84-16 as a member of the Lions.  Denver was a New Jersey state qualifier for Central Regional High School before moving on to TCNJ.  Denver and the rest of the Lions are done competing for the semester and will next be seen on January 8th at the North/South Duals hosted by Ursinus College.