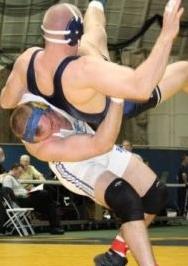 The d3wrestle.com/WWSport.com Wrestler of the Week is Judd Connell of the Merchant Marine Academy. Connell was 4-0 last week with a pair of falls and a forfeit to go along with a decision. The decision came against 2x NCAA qualifier and 2009 All-American Brock Glotfelty of McDaniel. Glotfelty had beaten Connell in each of the past two Centennial Conference heavyweight championship matches as well as in the first round of the tournament the year before that. Connell’s wins this past week helped the #11 ranked Mariners to a 4-0 record and moved him up to the #3 spot at 285.

A senior from Hastings, Minnesota, Connell 20-1 this year with eight falls.  He has defeated Glotfelty as well as 2x 197 lb. NCAA runner-up Ryan Malo of Williams.  He is a two time runner-up in the Centennial Conference, and he has come on strong with his best season yet in 2010-2011, making himself the current favorite for the Centennial Conference championship.  Because tonight’s match against Nassau has been postponed due to weather, Connell and the Mariners will next take the mat on Sunday at home against Stevens, Muhlenberg, and Ursinus in a Centennial Conference quad.