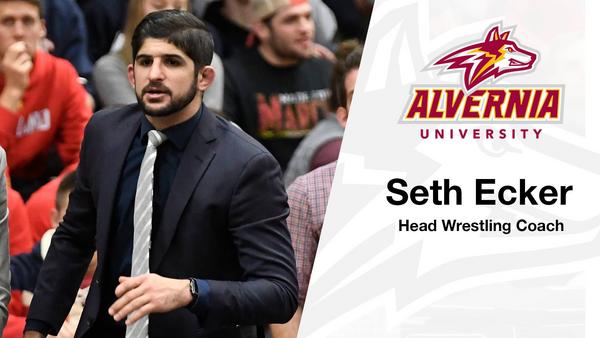 Seth Ecker, formerly an assistant coach at the University of Maryland, has been announced as the first wrestling coach at Alvernia University. The two-time NCAA champion for Ithaca spent one season on the bench at Maryland after two years as an assistant at his alma mater before taking the reins at the Reading, Pennsylvania, school. Alvernia begins competition in the 2019-2020 season and will be the sixth MAC school with wrestling, joining Delaware Valley, King’s, Lycoming, Messiah, and Wilkes.

Ecker joins Alvernia following a year as the assistant wrestling coach at the University of Maryland, where he coached the programs first NCAA Division I All-American and Academic All-American in four years.

“I’m elated to have someone of Seth’s pedigree leading our wrestling program,” said Stiles. “Not only was he a two-time national champion as a student-athlete, but he’s been on the coaching staffs at some of the nation’s strongest wrestling programs and conferences, including the Big Ten – arguably the best wrestling conference in Division I. And, as a Pottstown native, he has the contacts and network necessary to attract some of the top high school wrestlers in the region and beyond.”

Prior to his time at the University of Maryland, Ecker was the head assistant wrestling coach at Ithaca College for two seasons. Under his guidance, Ithaca produced six Division III All-Americans and a national finalist.

Ecker is a graduate of Ithaca College, where he earned a degree in Business Finance and Corporate Accounting. Ecker was a standout four-year member of the Bomber’s wrestling program. He was the first wrestler in Ithaca’s history to be a two-time national champion at 133 pounds. He finished his career with a 108-20 overall record. Ecker was a three-time NCAA Division III All-American, a two-time CoSIDA Academic All-American, and a three-time Scholar All-American. He was also named the 2012 Capital One At-Large Division III Academic All-American of the Year.

“First, I would like to thank Bill Stiles, Alvernia Athletics, and members of the search committee for believing in my vision to lead this program,” said Ecker. “I was blown away on my visit with the quality of staff, coaches, campus community, growing athletics department and facility upgrades.”

“I am honored for the opportunity to become a part of this department. Starting a new team will be a challenge and I am eager to bring my best every day to build a reputable wrestling program. I am thrilled to return to my hometown area and am excited to work with the members of Alvernia University as we usher in Alvernia Wrestling.”

Wrestling will be Alvernia’s 28th varsity sport, and will begin competition in the 2019-20 season. Alvernia will be the sixth member of the Middle Atlantic Conference to sponsor varsity wrestling. Messiah College earned the 2018 MAC Championship followed by Delaware Valley, Wilkes, Lycoming, and King’s.