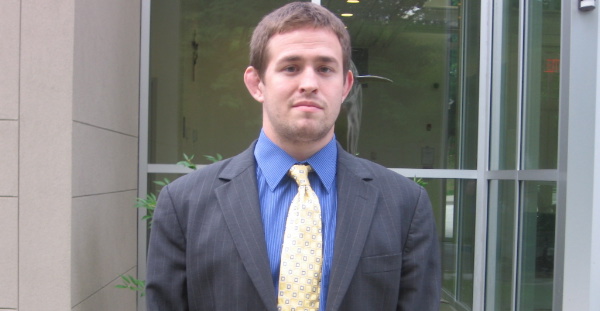 The College of Mount St. Vincent is set to begin competition in the 2012-2013 season in Division III. The school, located on the banks of the Hudson in the northwest corner of New York City, will be the fourth Division III team in New York City, joining Yeshiva, Hunter and New York University. Ryan Cooley, a program director with Beat the Streets and former NYU wrestler, has been named the new head coach and will be spending the next year getting the team ready to compete. It is great to see Division III schools adding the sport, and Cooley was kind enough to answer some questions about the program for d3wrestle.com.

d3wrestle.com: You’re set to begin competition in the 2012-2013 season. What are you doing now, over a year ahead of that, to get the team ready to compete?
Ryan Cooley: This summer I participated in the National Wrestling Coaches Association’s Leadership Academy and I gained a ton of useful insights into running a program. Combining what I learned there with my previous experiences and the guidance I’m getting from Mt St Vincent’s Administration, I’m working to build a foundation for a successful program. This year, we’re building a brand new wrestling room and ordering mats and equipment. I’m also working to surround myself with a successful staff and getting to know the many amazing people we have on campus that can be resources for our team. In addition I have to recruit, so I’m working to get the word out to the wrestling community that there is a new Division 3 Program in New York City. To spread the word, I’m trying to get to as many meets and club practices as I can, and trying to meet as many high school coaches and athletes as is possible between now and the 2012-13 season.

d3: Do you have a specific plan or strategy for filling your team over the next 12 months?
RC: I’m looking for high character kids who want to be a part of building a successful program. A talented student-athlete could go to a lot of schools and become an All-American, Academic All-American, or a National Champion, but being the first person in a program’s history to achieve those honors is really special. Interested student-athletes should fill out our recruiting form.

d3: How will your work at Beat the Streets mesh with your position at the college?
RC: When I was hired at Mt St Vincent I realized that there simply are not enough hours in a day to do both jobs to the best of my ability. As a result, I’m no longer working for Beat the Streets in a full time capacity, but I will continue to do whatever I can to help BTS grow wrestling in New York City.

d3: How has your experience as a wrestler at NYU, coach at Hunter, and Program Director at BTS prepared you for this job?
RC: To fully address this question I need to go back even earlier in my wrestling career. I started wrestling in elementary school in Libertyville, Illinois, then moved to Pennsylvania and competed in Middle School and High School. During my career at NYU I also spent summers working at the J Robinson and Ken Chertow wrestling camps. Over the last 4 years at BTS and Hunter I’ve been exposed to tons of amazing and unique wrestlers and coaches. I’ve also had the opportunity to coach youth, junior high, high school, college, and senior level wrestlers. Through all of this I’ve tried to soak up as much knowledge as possible, and now I believe that I have a truly unique perspective on the sport.

d3: What are some distinctive attributes of the college, or why should a high school wrestler consider the school?
RC: The school was founded in 1847 by the Sisters of Charity of New York. The College of Mount Saint Vincent maintains a longstanding tradition of faith, service, and compassion that reflects and honors the school’s Catholic heritage. Students of all beliefs and backgrounds continue to uphold this value of responsibility towards others. The College of Mount Saint Vincent is a small, coeducational private college of 1,600 students (75% female) located in the beautiful and historic New York City neighborhood of Riverdale on the border of Westchester County. It is a 70 – acre campus of rolling lawns and wooded hills overlooking the Hudson River, just 12 miles from midtown Manhattan. Our student to faculty ratio is 13: 1. At the Mount We offer 24 majors to choose from including Business Administration, Biochemistry, Communications, Education, etc. Also students may prepare for careers in the fields of law, medicine, dentistry, physical and occupational therapy, optometry, and podiatry through the Mount’s pre-professional programs, which meet the requirements needed to pursue advanced degrees for those professions.

d3: How will you define success the first 2-3 season of the program, and what are your long term goals?
RC: In my first three years I’d like to produce an All-American, an Academic All-American, a winning dual meet record, and a top 10 team GPA. Eventually I’d like our team to be in the top ten every year both in team GPA and at the NCAA Tournament.

d3: What do you believe are the keys to success in Division III wrestling?
RC: I believe the key to success at all levels of wrestling are surrounding a program with as many high character, high energy student-athletes, coaches, and administrators as possible. At Mount Saint Vincent we have a great start to that foundation. President Charles Flynn recently spoke about adding wrestling at the Mount’s orientation and our student body is excited about it. Between Dr Flynn, our Vice President for Student Affairs & Dean of Students Dr Dianna Dale, our Athletic Director Jay Butler, and all of the staff members they oversee, we have a great leadership structure in place to support our student-athletes. Now it’s up to me to bring quality coaches and student-athletes onto campus to take advantage of everything our school offers.

d3: What attracted you to this position?
RC: I have the opportunity to build a brand new wrestling program from the ground up at a great school in an amazing city, what’s not to love?