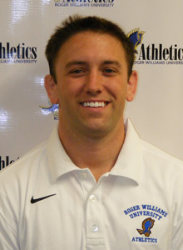 BRISTOL, R.I. – The Roger Williams University Athletic Department is pleased to announce Jon Egan as the Head Coach of the RWU Wrestling team.

Egan will serve as the Co-Head Coach with Dave Kemmy for an undetermined amount of time as he transitions toward being the Head Coach prior to the 2012-2013 season.  In August, Dave Kemmy was named the Director of Athletics after serving as the Acting Director of Athletics for two years.  Kemmy has served as the Head Wresting Coach since the 1994-1995 season and has been inducted into the National Wrestling Coaches Association Hall of Fame, the Rhode Island Wrestling Hall of Fame, and New England Wrestling Association Hall of Fame.  Kemmy noted that “Jon has prepared himself well for this appointment. We are excited to have someone who has tremendous passion for Roger Williams University and the sport of wrestling to lead our program. The future of the program is in very capable hands.”

Egan is no stranger to the Roger Williams Wrestling program.  He has served as an assistant coach for program since September 2010 after three years as the Head Varsity Wrestling Coach at Milton Academy. Egan also had a very successful career as a wrestler at Roger Williams.  He was a three-time Academic All-American as well as a four-time All-New England selection.  Egan was named the Roger Williams Male Athlete of the Year in 2005 and ranks third all time in wins at RWU.  Additionally, Egan ranks in the top ten in take downs, reversals, near falls, and team points.  In high school, Egan was the state-runner up as a junior before becoming the Rhode Island State Champion in 2001.

Upon being offered the position, Jon Egan stated, “I am truly honored to be given the opportunity to lead this program.  I have a tremendous amount of pride in this university and I look forward to continuing the success that Coach Kemmy has built.”

Egan graduated from RWU with a degree in Financial Services and holds an MBA from UMass-Boston in Finance.  He will also serve as the Athletic Operations Coordinator for the department.