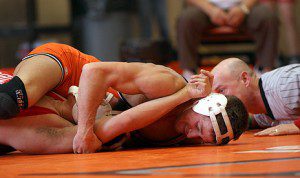 The d3wrestle.com/WWSport.com Wrestler of the Week is Chris Sandy of Wartburg.  This past weekend, Sandy won the 141 lb. bracket at Wartburg’s own Dick Walker Invitational.  He won four close matches to take the championship over Nick Coffman of Grandview.  Sandy was the #2 seed in a weight class with returning All-American Kevin Donahue of Cornell, though the two did not meet.

Sandy, a senior from Spirit Lake, Iowa, is currently 18-2 on the year and has won championships at the Concordia Open and Simpson Invitational along with his recent Dick Walker title.  He is 8-0 against Division III competition including a win over All-American Austin Bautista in the finals of the Concordia Open.  Wartburg next takes to the mats this Sunday at the Wartburg-hosted Desert Duals in Las Vegas.  Desert Duals Website