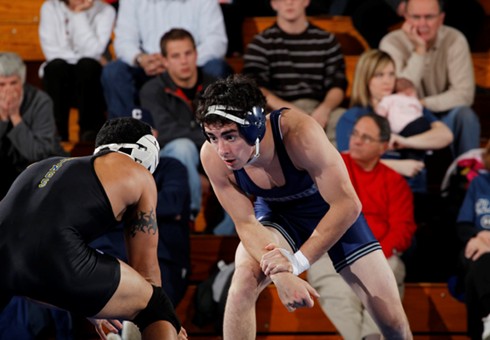 The d3wrestle.com/WWSport.com Wrestler of the week for this past week is Ryan Earley of Elmhurst. The Wrestler of the Week for the week before will appear later today. Wrestling at 141 lbs., Earley helped lead the Blue Jays to a second place finish at the NWCA National Duals in Illinois this past weekend. Earley finished the weekend with a 4-0 record at Elmhurst topped Wesleyan, UW-Whitewater, and Cortland before falling to the defending NCAA Champion Knights in the finals. On Saturday, Earley defeated Nick Scotto of Wesleyan 2-1 and d3wrestle.com #5 Jake Fredricksen of UW-Whitewater. In the semifinals on Saturday, Earley defeated #8 Brian Bistis 6-3 and then #4 Thomas Mirocha 8-5 in the finals. With three victories over ranked opponents, Earley has been moved to #4 in the latest d3wrestle.com and NWCA Rankings.

Earley, a senior from Wheaton, Illinois, is now 14-0 this season at 141 after spending the past two years at 149. He was one match away from the podium last year at the NCAA Championships and currently sports a 79-24 career record. He was 3rd at last year’s Great Lakes Regional, qualifying to his first NCAA Championships. Earley and the Bluejays host the Al Hanke Invitational this weekend before heading up to Whitewater for the Border Brawl Duals on the 26th.