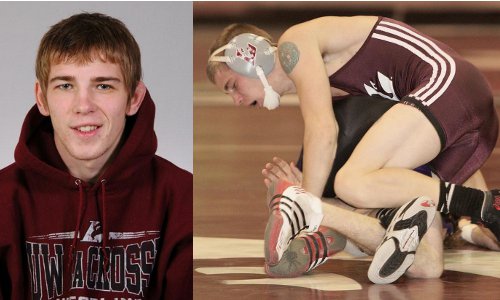 The d3wrestle.com/WWSport.com Wrestler of the week for this last week before Thanksgiving is Albie McKinney of the University of Wisconsin-La Crosse.  Wrestling at 125, McKinney placed third in the Auggie Brute-Adidas Open at Augsburg College this past weekend.  While McKinney’s only loss came to Division II ranked Trevor Franklin of Upper Iowa, he won matches against 2010 NCAA Division III All-Americans Josh Roberts of Augsburg and Austin Mogg of Buena Vista.  Roberts was 4th in the 2010 NCAA Championships, while Mogg was 5th.  In addition, Roberts and Mogg are the two wrestlers who defeated McKinney at the NCAA tournament in March.

McKinney, a senior from Luck, Wisconsin, is a two time WIAC champion and two time NCAA Qualifier.  He just missed placing last year, losing to Mogg in the All-America round.  He has compiled a 40-18 record so far in his two-plus years at La Crosse after transferring to the school after spending time at Harper College and Western Technical College.  In high school, the exercise sport science and physical education major was a two time state placewinner and graduated holding his school’s record for career wins.  McKinney and the rest of the Eagles are off for the holiday but come back on December 2nd for a dual meet at Platteville before hosting the Holiday Inn Express Duals on Saturday, December 4th.