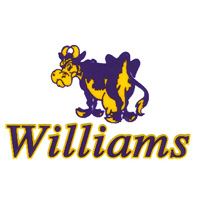 Season outlook:
Williams had another good season last year, turning in a repeat win at the NEWA Championships and sending three the the NCAA Championships for the first time. They are led by NCAA falls leader and 2x NCAA runner-up Ryan Malo.  Malo suprised some with his first trip to the NCAA finals, but came in as the #2 seed last year and lived up to that expectation.  He is back for one more year, though both of his finals opponents also return.  Corey Paulish was a 4th place finisher at 141 two years ago before qualifying but failing to place at 149 last season.  He is in a tough weight nationally, but has the experience to get back on the podium.  The future remains bright for the Ephs, as they had two freshmen make the NEWA finals before falling just short of the NCAA tournament.  Cez Antista and Tom Foote both just missed out on the trip to Cedar Rapids.  Foote is back at 285, but Antista will be moving up to 141 following the graduation of national qualifier Dylan Rittenburg.  Williams had their first ever 20 win season last year, and they have a strong group ready to try to make it two in a row while seeking a third straight NEWA Championship.  New coach Rich Hasenfus has moved over from Norwich and will do his best to keep the momentum going.  He has a strong roster that should help make that happen.