This map includes all 94 teams in NCAA Division III wrestling except Pacific, which is in Oregon. Of those 94, three (SUNY-Morrisville, Lincoln Christian, and Tri-State) have yet to compete in a national qualifying tournament, but will in the near future. MacMurray College appears to have finalized their decision to drop the sport based on the content of their wrestling website, but they are included in this list barring a formal announcement. Click to enlarge. 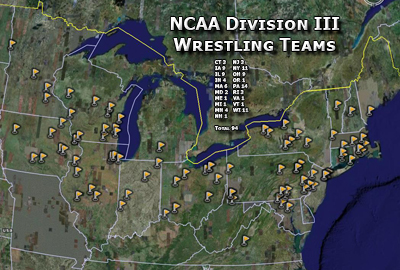 Previous: Elizabethtown to Metro
Next: Tom Jarman to Retire