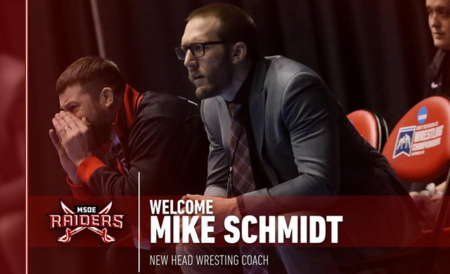 Mike Schmidt has been elevated to head coach at Milwaukee School of Engineering. He had been an assistant with the program since 2013 and has been part of a coaching staff that had four NCAA qualifiers and a 2018 All-American who was the program’s highest ever finisher. Schmidt wrestled for the University of Minnesota and the University of Wisconsin-Whitewater, and was a University National All-American in Freestyle and Greco-Roman.

Schmidt takes over for Matt Zwaschka, who stepped down earlier this month to become the head coach at UW-Whitewater. Schmidt had been an assistant with the Raiders since 2013.

“We are excited about Mike becoming our new head wrestling coach,” Miller said. “He has a familiarity with the program and our school, which is great, but he also has a clear vision for MSOE Wrestling going forward. We are excited about what he will bring in his new role.”

Schmidt has played a key role in MSOE’s success in recent years, as four wrestlers have qualified for the NCAA Championships with one All-American award. Last season, Austin Bellile made his second-straight national meet appearance and placed seventh at 285 pounds. It was the highest-ever finish for a Red & White wrestler and was the program’s third All-American

“I am extremely excited for this opportunity,” Schmidt said. “I would like to thank Brian Miller and the university for entrusting me with the next era of MSOE Wrestling.”

He completed his collegiate career at UW-Whitewater, serving as team captain and qualifying for the NCAA championships. He graduated from UWW in 2008 with degrees in accounting and finance.

Away from his coaching duties, Schmidt is a mutual fund compliance officer with US Bancorp Fund Services.

The Raiders start their season Nov. 10 at the Dan Gable Open and Luther Open.