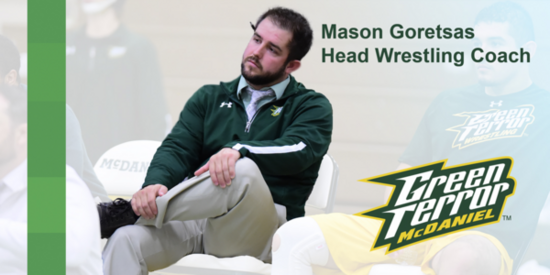 After four years as an assistant coach Mason Goretsas has been promoted to Head Wrestling Coach at McDaniel College to take over for the recently departed Davey Blake. Goretsas is also a graduate of the school, earning his degree in 2015. In three seasons as a wrestler, he was a two time Centennial Conference placewinner and won 67 matches for the Green Terror after transferring in from the University of Maryland.

“As we made our way through this search process, we quickly determined that elevating Mason was a strong option,” Moyer said. “The knowledge he has of the program and wrestling in Carroll County is unmatched. From growing up around Green Terror wrestling to his time as a student-athlete and coach at McDaniel, we know that Mason will continue the proud tradition of our program.”

Goretsas, a 2015 graduate of the College, is elevated to head coach after spending the last four seasons as an assistant on staff.

“I am very excited for this opportunity to continue my journey with McDaniel College and this program,” Goretsas said.

A local product, Goretsas was a two-time Maryland State Champion for North Carroll High School before starting his collegiate career at the University of Maryland. Goretsas returned home in the fall of 2011.

He wrestled for the Green Terror for three seasons, posting a 67-27 record at McDaniel. He was a two-time placefinisher at the Centennial Conference championship.

Goretsas graduated with his bachelor of science degree in exercise science in 2015 and completed his masters in kinesiology this past spring.