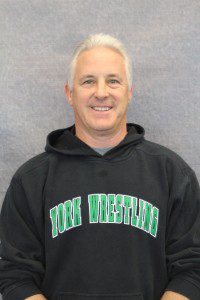 Tom Kessler is in the midst of his 21st season at the helm of the York College wrestling program. In 20 years, he has led the team to a 303-133-3 dual-meet record, for an outstanding .693 winning percentage. Kessler garnered his historic 300th career triumph when the Spartans bested Shippensburg on January 28, 2012.

During his outstanding career, Kessler has had the Spartans ranked as high as fifth in the national poll in addition to coaching one two-time national champion, 13 Spartans who have garnered 15 All-American honors, including a pair of wrestlers in the 2010-2011 season. Additionally, he has coached 16 wrestlers who have captured 24 NWCA Scholar All-American accolades, including James Laughlin’s selection at the end of the 2010-2011 campaign. Academically, the Spartans finished the 2010-2011 season ranked 12th in the nation with a GPA of 3.337.
Currently, the 2011-2012 Spartans are ranked #15 in Division III while two individual wrestlers are ranked #2 and #3 in their respective weight classes.

Kessler is the winningest coach in the illustrious history of the Spartans wrestling program. He led the Spartans to the school’s first Metropolitan Conference wrestling championship in 2006 and then led the Green and White to a fifth-place finish at the 2006 NCAA Division III National Championship tournament, the highest finish for a York College wrestling team at the tournament. For his efforts in 2006, which included 200th career victory in the 35-12 win over Thiel on January 14, 2006, Kessler was named the Metropolitan Conference Coach-of-the-Year and later selected as the NWCA Division III National Coach-of-the-Year.

He has been named the league’s Coach-of-the-Year on a trio of occasions, collecting the honor in 1996, 2004, and 2006.
Furthermore, he has coached six Daniel J. Klinedinst award winners, given out to York’s top senior male athlete, as well as five Jake Jaquet “Fighting Heart” award winners, recognizing a senior Spartan student-athlete who has exemplified perseverance despite challenging circumstances during their career.

A 1985 graduate of York College, Kessler holds a bachelor’s degree in criminal justice and a secondary education teaching certificate, and a master’s degree in special education.

A four-year letter-winner and team captain as an undergrad at York College, Kessler compiled a 75-15 collegiate record and captured numerous championships. A three-time NCAA Division III National Qualifier, he is the only Spartan wrestler to win two NCAA Division III Eastern Regional titles and in his senior year earned All-American honors when he placed fourth at 126 pounds in the national tournament.
He was also selected as an NWCA Scholar All-American by the National Wrestling Coaches Association as a result of his outstanding academic and wrestling record.

Kessler, a York County 2007 Hall of Fame inductee, is a member of the York College Athletic Hall of Fame.